As some of you may have noticed, there haven't been a lot of updates to the app in the past months. But that is not because we've stopped development. On the contrary, we've been working on some major stuff in the background. Now with this post, we want to actually take the time and explain in detail where MoBro is headed and what's to come in 2022.

So what’s new in the App?

The current App (v1.0.0-beta13 and previous) will be replaced by a new and completely re-designed app.
The new app launches with lots of big changes on how things are handled both in the UI but also in the background.
Please just report any bugs or issues you encounter on the Forum or in Discord and we will do our best to fix those and gradually improve the new MoBro version.

Once you open the app, you will be greeted by the new overview page.
Here you will get a quick and concise overview of your PCs main components, such as the processor, graphics card and amount of memory. Those values will be paired with basic performance data, such as CPU and GPU usage.

Additionally you can also check our latest news. Those are the same posts as published on our website, but now also accessible right inside the MoBro app.

This page is still in early development and we don’t really have something to show just yet.
But here’s a screenshot of the new settings page instead to illustrate the new design and style we’re aiming for in the new version: 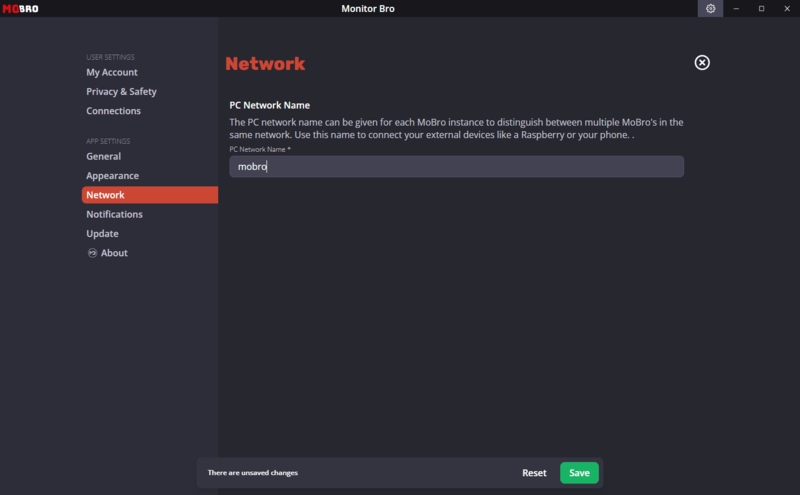 Some of you might remember the poll we did on our Discord server regarding this very topic. As all of the votes were in favor of this change, here's what's going to change.

But first off: this is going to be a breaking change (!), as we're completely overhauling how themes are handled in MoBro.
This means: once you update to the new version, your current layouts and themes will no longer work. If you wish to keep using those, please keep using the current app version (v1.0.0-beta13) and do not update!

Alright, so what's going to change?

For example:
We will only need to develop one Widget pack for various different clock widgets. You can then use that pack in EVERY dashboard. (Currently a clock widget would have to be implemented by each an every theme and is not interchangeable, as you can only use 1 theme at a time)
Also you will be able to use e.g. the default line graph, but also the gauge from dubbhadhar.

For you developers out there:
Creating new widgets will now follow a strict and easy component pattern.
You no longer have to take care of handling stuff like positioning widgets within the layout and handling the whole customization menu. This will all be taken care of for you by our new SDK.
All you should have to focus on is creating and styling individual widgets. And that's exactly how its gonna be going forward.
(Note that we’re still working on the SDK. So this will be publicly released at a later date)

All of the existing themes will be ported over to widget packs by us. So at release time the following widget packs will be available:

Now as an unfortunate consequence (due to all these major changes) the popular legacy community themes such as ‘One’, ‘Astern’ and others can no longer be used in the new app.
Also all your layouts of the current themes will be gone (as there are no more themes).
If you wish to continue to use those, please stick with the old version of the app.

Now we know that despite the poll we did, some of you might still not like this major change, but we are convinced that the compromise we're making here will greatly benefit the user experience.
We're really looking forward to seeing all the different dashboards you guys are going to create! :D 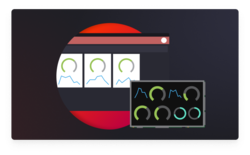 The connected devices tab was completely re-organized. All your MoBro devices (Raspberry Pis, Phones, local windows) are listed here alongside their current status.
Disconnected devices will now stay visible for a better overview, but can be manually deleted once you no longer use them.

We intend to expand this view with custom cards based on the device type.
E.g. a Raspberry Pi card will include buttons to lead you back to the configuration wizard, allow to trigger a reboot, show CPU usage/temperature of the Raspberry Pi, etc.
Note that this is not implemented yet and will not be part of the first release.

A first design below illustrates how we currently envision the marketplace to look like. Just keep in mind that this is subject to change. 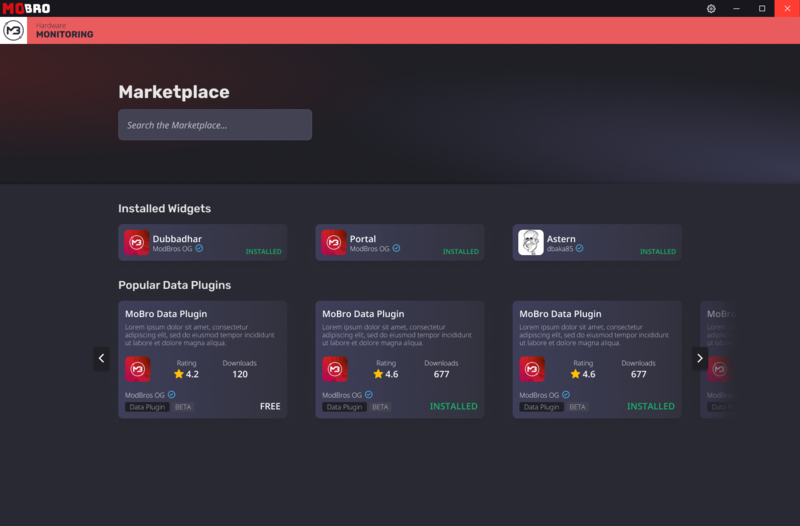 Also note that most of this is only in very early stages of development and will not be part of the first release.
For the initial release all widget packs and plugins will still be shipped as part of the desktop app and not actually be loaded from the marketplace.
But we believe the marketplace (once finished) will bring great value to MoBro and moreover to you, our users. As such we just wanted to share those plans already :)

This is another part of the application where we basically completely threw out our current implementation and started from scratch again.

All of this allows for:

On release the following data plugins will be available:

We do already have plans for future plugins that will provide weather data, financial data, news, gaming stats and maybe even a twitch/obs integration etc.
If you have any requests or ideas on what you would like to see included, just let us know!

Note for developers: the SDK is not final yet and might still change a bit. Also we did not even start working on the documentation at all. So this will also be made public at a later date.

Just quickly and easily exploring all available monitoring data is not possible in the current app version. To do that you have to open the theme editor and basically go through a widgets configuration, which is really cumbersome.

Until now, as that’s going to change in the future. We will introduce a new data explorer, that allows you to simply and quickly skim through all of your available data from all installed plugin.
We have plans to extend this so you can properly navigate all your data by filters, search, data types, …

This feature will be implemented at a later stage and not be part of the initial release.

We weren't really satisfied with the current presentation of MoBro on our Website.
The current MoBro download page does a poor job at explaining what MoBro actually is, what its core features are and what it's actually capable of.
So we've started working on a new site, that will replace the current download page and do a better job at presenting MoBro.
While probably not really important for you guys, this is still something that has been on our list for quite some time.

The page is still in the works, but we will make sure to let you guys know as soon as it goes live :)

So, when do we get all of this?

Now we realize that we can’t just post all of this without giving you some idea of the release date.
But as you can probably guess, all of these changes come down to a really considerable amount of work. And most of it is not even directly visible in the app.

Also for those that are not aware yet: keep in mind that all of us do have regular fulltime day jobs. So all of the development for MoBro happens in between on evening/nights and weekends. So sometimes stuff just takes a bit longer to complete.

Since we’re still not done with everything we want to include in the first release, we currently roughly aim for a pre-release for our Patreons at the end of Q2.
Depending on how this release works out, discovered bugs and issues etc., we currently aim for the general public release a month later.

Included in the first release:

Not included or not ready yet: