As you probably already noticed, the Raspberry Pi family expanded just recently.
The long awaited successor to the Raspberry Pi Zero has finally been released in October 2021, a full 6 years after its predecessor first went on sale.

Naturally we ordered one first day we could to make sure we can test our MoBro image 😁
(and before they inevitebly will be sold out, yeah chip shortage...)

While there are also other minor changes, the most notable one for us is the upgrade from a single ARM11 core to four Cortex-A53 ones, so more than a fourfould increase in processing power.
The available RAM didn't increase though and stayed at the same 512MB.
We would have liked to see a bump to 1GB, but I guess you can't have everything.
Especially when taking the agressive price point of 15$ into account.

Now what does all of that mean for you when using it for MoBro:

So now that the performance penalties of the original Pi Zero are mostly gone, this new Pi Zero 2 provides a viable alternative to the bigger Raspberry Pi 3 and 4 models:

In our opinion, this Raspberry Pi model might be just the one that strikes the best balance of performance, price and power requirements to be used for MoBro.
So with this image update the Raspberry Pi Zero 2 W is now officially supported! :)

And as we were already at it, we also tackled a problem that many of you guys have already encountered and can be quite a hassle to deal with:
Getting the connected display to use the correct resolution.

So with this image we also introduce a new option to the configuration wizard, that now allows you to select your preferred resolution for you HDMI display as shown below. 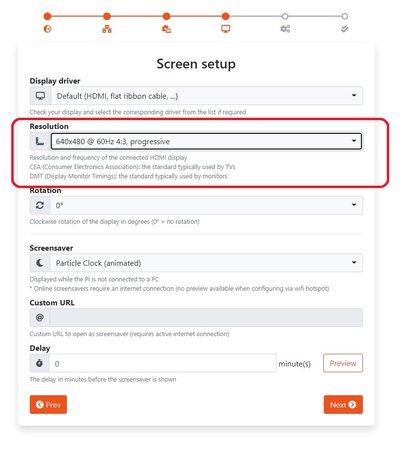 The selection is based on the supported resolutions of your display that we automatically query in the background.
So no more manual configuration edits required for this! :)

Mind you that this only works for HDMI displays though.
For all displays connected via the GPIO pins you still have to install and rely on the display driver.

You can download the latest version of our image (v12.3) here.